The Order of St. Denis of Zante 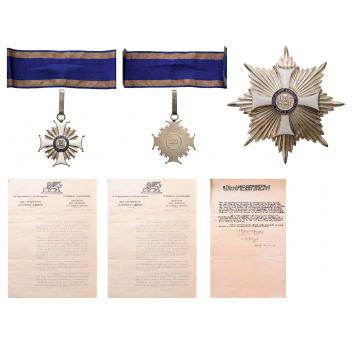 Grand Commander's Set. Silver-plated, 53x55 mm, white enameled cross with silver beams between the arms, white enameled centre medallion with the image of St. Dyonisos, blue enameled outer circlet, with greek inscription, with original neck ribbon. Breast Star with silver-plated rays, superimposed by the Order's cross, thin, round pin with safety-catch. Together, a two-page, hand-signed letter from Kyprianos, Archbishop of Central Africa, sent from Usumbura on August 20th 1962, addressed to His Majesty Mwambutsa IV, "Mwamy" of Burundi, with attached an official photo mecahnic copy of the decree creating the Patriarchy of Central Africa, asking for his diplomatic recognition. A highly important group, documenting the relationship between the Orthodox and Catholic Churches and their role in the politics of Africa in the first years of the independence of the African states. Very fine condition. I RR!