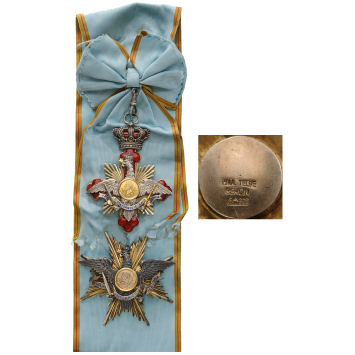 Grand Cross Set, intituted in 1906. Sash Badge, 105x77 mm, gilt Silver, trefoiled, red enameled, GOLD edge and 9 rays between the limbs. Silver crowned eagle, spreaded wings on the cross, holding a sword in the right claw and a scepter in the left. Round GOLD medallion on the eagle's chest with King Carol's 1st bust, on the reverse a blue medallion with the legend: "1866-10 Mai-1906", in the centre, King Carol I cipher. Above the cross a silver crown and the inscription: "1866-10 Mai-1906". Below, a GOLD scarf with blue enameled legend: "Prin statornicie la izbanda", original light blue sash. Breast Star, 1st Model, 85 mm, gilt Silver, hallmarked "800", maker's mark "Paul Telge, Berlin", the shape of an 8 rays star, eagle in the center. The Order of Carol I, the highest Romanian Order, instituted on May 10th, 1906, part of the 40th jubilee celebration of King Carol of Hohenzollern, was awarded until 1932 in 4 classes: Collar, Grand Cross, Grand Officer and Commander. With the introduction of the Order of Loyal Service in 1932, the last two classes of the Order Carol I were closed, but the decorations could be worn until 1947. An extremely rare set in perfect condition! RR! I