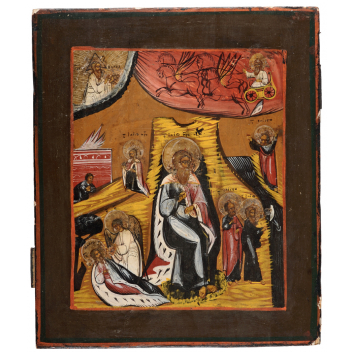 Tempera on wood, dimensions 31x26 cm, 19th Century. Saint Elias, also known as Elijah, is commemorated in the Byzantine Church on July 20th. Elias is an Old Testament prophet who lived in the 9th Century before the Coming of Jesus Christ. The troparion of his feast calls him "a pillar of prophets, and the second forerunner of the coming of Christ". The icon depicts him in a chariot drawn by fiery horses heading heavenward and his cloak falling earthward into the outstretched arms of Elisha, his companion and disciple, crossing the River Jordan. The main scene presents the saint hiding from persecutors in Cherith and miraculously fed by a raven. On the left side of the icon he is depicted with his disciple and with an angel illustrating scenes from his life. The end of the earthly life of Elias came mysteriously. As he was conversing with Eliseus on the hills of Moah, "a fiery chariot, and fiery horses parted them both asunder, and Elias went up by a whirlwind into heaven" (Kings. 2:11) Jews, Christians and Moslems pay high honor to Elias, Carmelite monks cherish the belief that their order was in some sense founded by him. Together with Moses, he appeared at Christ`s transfi guration.