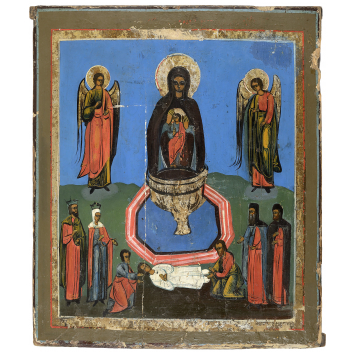 The Mother of God of the Life-giving Spring or Life-giving Font is an epithet of the Holy Theotokos that originated with her revelation of a sacred spring (Hagiasma) in Valoukli, Constantinople, to a soldier named Leo Marcellus, who later became Byzantine Emperor Leo I (457-474). Leo built the historic Church of St. Mary of the Spring over this site, which witnessed numerous miraculous healings over the centuries through her intercessions, becoming one of the most important pilgrimage sites in Greek Orthodoxy. Thus the term "Life-giving Font" became an epithet of the Holy Theotokos and she was represented as such in iconography. The feast day of the Life-giving Spring is celebrated on Bright Friday in the Orthodox Church, and in those Eastern Catholic Churches which follow the Byzantine Rite. Additionally, the icon of the Theotokos the "Life-giving Spring" is commemorated on April 4 / 17 in Slavic Orthodox churches. Very fine condition!