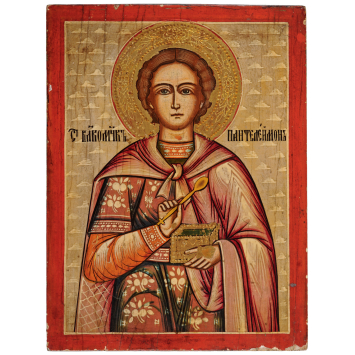 Tempera on wood, 44.5x37 cm, 19th Century. This icon is presenting the church feasts around the main feast of Ressurrection which is the Ortodox Church`s greatest feast celebrating Easter and Crist`s descent in Hell for the salvation of mankind. The outer border shows festival scenes depicting the Birth of the Virgin, Presentation of the Virgin in the Temple, Annunciation, Adoration, Baptism of Crist, Transfi guration, Dormition, the Rising of the Cross, the Entry in Jerusalem and the Presentation of Christ.the The bronze triptych on top depicts the Deisis. The Greek word "Deesis" means literally "entreaty" and is usually rendered as "intercession". However the composition is older and examples are known from the 9th Century when the meaning was not so much that of intercession but rather that of honoring Mary and John as the fi rst witnesses of Christ`s divinity. As was often the case, the composition is an adaptation of the image from preChristian, imperial times where one saw the emperor enthroned between two courtiers.