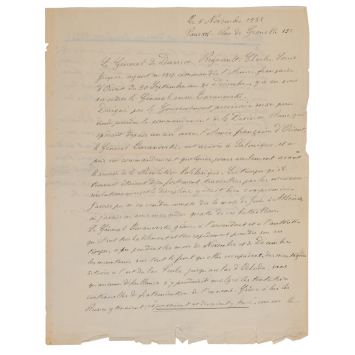 Stating great services by General Taranovski in 1917 during the Bolshevik insurrection, his decisive ability and brilliant accomplishing of its mission in so difficult conditions. In this letter, we learn that General Taranovski has retrieved the treasure of the divisions under his control more than 30 millions at the time (!!) fully paid to the French Treasury. Final proposal of Regnault to promote Taranovski in the order of the Legion of Honor. With respect to the sum of 30 million returned to France by Taranovski, it is shocking to consider the attitude of the State towards the payment of a pension‚Äö√Ñ√∂‚àö√ë¬¨‚àÇ General Regnault was the Commander in Attica of the French army in 1917.