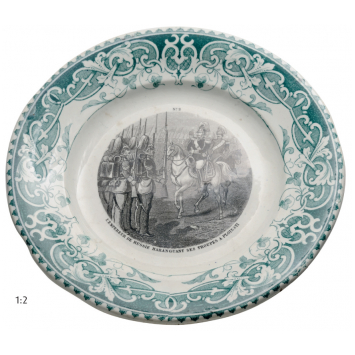 Motive with green interlacing on the border and a central medallion, specimen no. 2 of the series produced by the French "Creil&Montereau factory" for the RussianRomanian military alliance against the Turks in 1876, scene entitled "The Emperor of Russia encouraging its troops in Ploiesti" (Romania), edition circa 1880, signature on the reverse, diameter 20.5 cm.