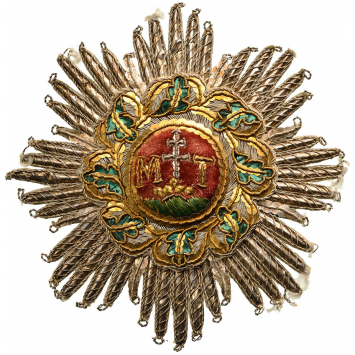 An early, Napoleonic period embroidered Breast Star of the Order: 97 mm, the rays, made of sheet-silver and silver wire, the tips with tiny loops to
fasten the star to the habit; the centre medallion in purple-red velvet with the double cross in silver paillettes and twisted wire, rising from a golden
crown, resting on the green/gold embroidered three mounts and the “M” – “T” lettering in gold wire/paillettes; the outer circlet also made of gold
paillettes, the oak leaves of green-lacquered sheet-silver, golden paillettes and twisted wire; the back, covered with its original, ancient, ivory-paper.
A highly important, rare piece, enhanced by its rather unique, almost pristine condition.
Provenance: the estate of Marshal Davout, duke of Auerstedt, prince of Eckmühl (Annoux, May 10th 1770 – Paris, June 1st, 1823). He was one of the
most important military leaders at Napoleon’s side, often taking part to the most famous battles, at the head of the right wing of the Imperial Armée,
this being considered a particular honour, to exceptional commanders. At Napoleon’s return from the exile at Elba, Davout was – with Léfebvre – the only
Marshal of France receiving the Emperor at the Tuileries; he didn’t take part to the battle of Waterloo, but after the defeat, received the supreme command
of the French Army, then passed to his colleague, Marshal MacDonald. At the return of king Louis XVIII, Davout was expelled from all his titles and dignities,
retiring in his possessions. In 1817 he was reintegrated in all his titles and privileges. Died of tuberculosis at the age of 53. Created knight Grand Cross
of the Royal Hungarian Order of St. Stephen on April 10th 1810. Extremely rare, maybe the best preserved example known! I RR!