The Most Illustrious Order of St. Patrick 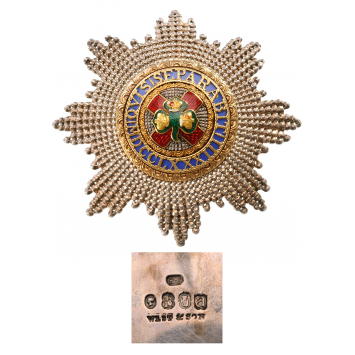 A Star of the Order, 66x35 mm, Silver with brilliant-cut rays, British hallmarked and maker’s mark “West & Son”, entirely pierced, central medallion GOLD, enameled, reverse with vertical tapering pin and hook. Extremely rare and very fine.
The Order of St. Patrick was founded by King George III in 1783 as a chivalric distinction proper to Ireland as a “constituent nation”, with England and Scotland. It was awarded for conspicuous merits to the Crown and the last
conferment took place in 1922, when most of Ireland became independent.
The Queen of England remains “technically” as the Sovereign of the Order. I R!