The Most Honourable Order of the Bath 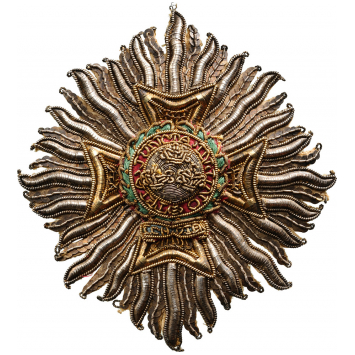 An Early, embroidered Grand Cross Breast Star of the Military Division (from 1815), 110x98 mm, the rays made of rich silver broderies, paillettes and wires, small loops to the tips; the centre in gilt-silver wires and polychrome embroidered centre medallion; the reverse with original paper backing (minor losses.
An important, visibly worn piece, in extremely fine condition.
The Order of the Bath, instituted in 1725, to reward the merits towards the Crown of both civil and military, by order of the George, Prince Regent, was divided into two different division to better signify the appreciation of the Sovereign towards the merits shown in the campaigns against Napoleon: “…to the end that those Officers who have had the opportunities of signalizing themselves by eminent services during the late war may share in the honours of the said Order, and that their names may be delivered down to remote posterity, accompanied by the marks of distinction which they have so nobly earned.” (The London Gazette, n. 16972, pages 17-20). II RR!