The Imperial Austrian Order of the Iron Crown 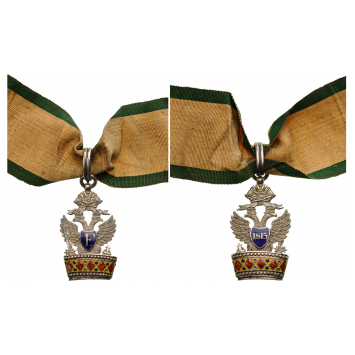 silver “Ordre du Rémplacement” decoration as a substitution of a formerly awarded Knight’s Badge of the Napoleonic, Italian Order of the Iron Crown: 45,5x25,5 mm, chiselled silver; Austria’s double-headed eagle holding the sceptre and the sword at left and the orb at right, resting on a polychrome enameled Lombardy’s Crown (minor chips to the enamels) with inner, blued iron insert; the breast and the back charged to the obverse and reverse, with blue enameled shields with resp. “F” and “1815”; small, thick suspension ring and oval, grooved ribbon ring; with long, original ribbon.Very fine condition, rarely seen with its mostly intact enamel.An interesting decoration, first testimony of the renewal of the only Napoleonic order survived outside France. The Austrian Emperor, when decided to create the Imperial Austrian Order of the Iron Crown, also wanted not to forget the former French knights, that became Austrian subjects, so, a special decoration in three classes and a medal (the latter to soldiers and military of a rank lower than officer) was created: the decoration could have been given only in exchange of the insignias of the ceased French order. I-II